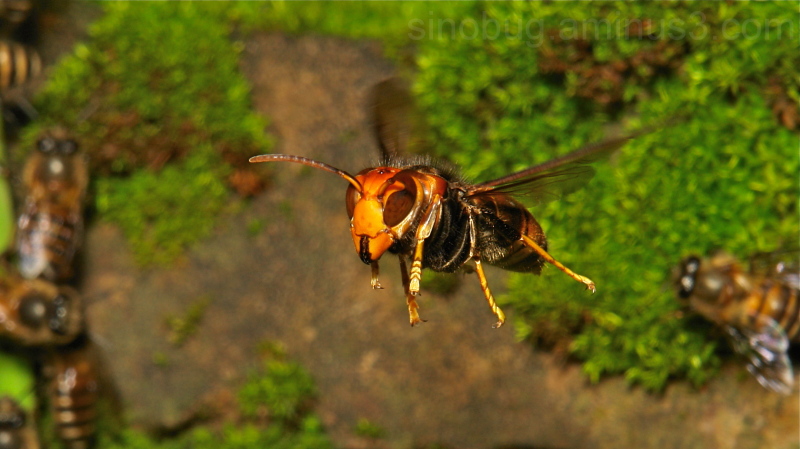 Posted by itchydogimages (Pu'er, China) on 30 June 2013 in Animal & Insect and Portfolio.

I was fortunate to observe the initial stages of what I assume was a raid on a bee hive. These hornets often attack hives ambushing returning individual bees or to obtain the honey bee larvae as food for their own larvae. A single scout, sometimes two or three, will cautiously approach the hive, producing pheromones to lead its nest-mates to the hive. This I believe is what I observed. No attack occurred while I was watching but a rotation of three hornets hovered menacingly outside the entrance to the hive which was within a stone wall. The bees were obviously agitated and formed a mass at the hive entrance performing a vibrating dance in unison (some are visible in this image). I felt intimidated not only because I was sitting close to an agitated bee hive but to be in the presence of these awesomely large and majestic hornets presumably plotting the demise of their lesser cousins.

Definitely a "wow" shot. One of your best. Being a beekeeper, I do not like predators like this one, but the shot is still awesome.

This image has been featured in 2 Remix collections.

Fooled by macrology by Josep